“The Prose Itself is a Marvel.”
— the New York TImes Book Review

“like a family around a dinner table, the tales in [Half Gods] support, contradict, and argue with one another. They provide a rich disorder”
— the New Yorker

“This is the best thing ever in the world of books. It is so refreshing to hear a different voice, a unique perspective in the world of same same… To have this book on tour was gold!”
— M.I.A.

“Kumarasamy writes with heart, wit, and an unflinching eye about the complexities of family, war, and finding one’s home.”
– Sara Nović, Girl at War

“Half Gods distills the mysteries of the human soul. In this age of displacement and sorrow, these stunning stories are reminders that even in the darkest times it is possible to write―to live―with clear-eyed compassion for others.”
– Ceridwen Dovey, Only the Animals

“These are wonderful stories, finely poised, beautifully written, and brimming with a rare wisdom.”
– Kanishk Tharoor, Swimmer Among the Stars 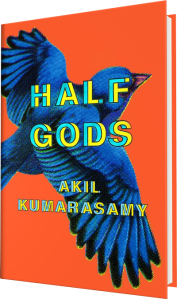 A startlingly beautiful debut, Half Gods (Farrar, Straus & Giroux)  brings together the exiled, the disappeared, the seekers. Following the fractured origins and destines of two brothers named after demigods from the ancient epic the Mahabharata, we meet a family struggling with the reverberations of the past in their lives. These ten interlinked stories redraw the map of our world in surprising ways: following an act of violence, a baby girl is renamed after a Hindu goddess but raised as a Muslim; a lonely butcher from Angola finds solace in a family of refugees in New Jersey; a gentle entomologist, in Sri Lanka, discovers unexpected reserves of courage while searching for his missing son.

By turns heartbreaking and fiercely inventive, Half Gods reveals with sharp clarity the ways that parents, children, and friends act as unknowing mirrors to each other, revealing in their all-too human weaknesses, hopes, and sorrows a connection to the divine.