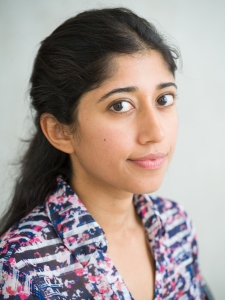 Akil Kumarasamy is the author of the story collection, Half Gods, published by FSG in 2018, which was named a New York Times Editors’ Choice, and was the recipient of the Bard Fiction Prize, Story Prize Spotlight Award and a finalist for the PEN/Robert Bingham Prize. Her work has appeared in Harper’s Magazine, American Short Fiction, Boston Review, among others. She has received fellowships from the University of East Anglia, the Provincetown Fine Arts Work Center, Yaddo, and the Schomburg Center for Research in Black Culture. She is an Assistant Professor at the Rutgers-Newark MFA program and her debut novel is forthcoming with FSG.